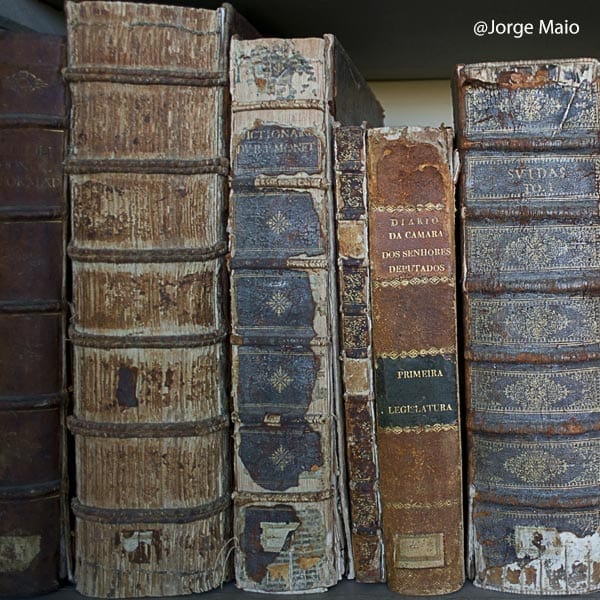 The Palace’s Library holds around 3 000 books, collected between the 16th and the 19th century by different members of the families Mascarenhas, Almeida Portugal and Távora. Commentaries of the Bible and hagiography, hunting and culinary arts, diplomacy and warfare, History, Philosophy, Belles-Lettres, Botany, Gardening and Agronomy are some of the domains covered by this collection. The Library of the palace is a remarkable example of a private library belonging to a Portuguese noble House, with the special attraction of including works which belonged to two famous authors from this family, Dona Leonor de Almeida Portugal, who was 4th Marchioness of Alorna and Dom José Trazimundo Mascarenhas Barreto who was the 7th Marquis of Fronteira.

The library of the Fronteira Palace is available to all readers interested in its contents. However, direct consultation is only possible by appointment after contact with the office of the Foundation, and is conditioned by the schedules, norms, and activities going on in the Palace.

RULES OF THE LIBRARY OF THE FRONTEIRA PALACE

The library at the Fronteira Palace is open to all readers that show interest in its collection. The access is granted through an appointment that needs to have prior approval by the administrative services of the Foundation of the Houses of Fronteira and Alorna. This appointment is restricted by the Palace’s opening hours, norms and activities that might be taking place there. Any request to see the books may be denied due to their state of conservation. All the visits should be preceded by the consultation of the library’s on-line catalogue and a request of the works in question with a minimum of two business days’ notice. To ensure the availability of the documents the reader should fill out the form available locally or at FCFA’s website. The form can be sent to FCFA through the e-mail address fcfa-cultura@fronteira-alorna.pt or by letter, addressed to Palácio Fronteira, Largo São Domingos de Benfica, 1, 1500-554 Lisboa. The answer to the request will be sent through telephone, e-mail or other suitable means.

FCFA REQUESTS THE FOLLOWING PRECAUTIONS WHEN CONSULTING THE WORKS:

The cases not covered or any interpretation/operation questions will be solved by FCFA’s services. The present regulation can be changed or revised anytime it is deemed necessary and without any prior notice.